From the Depths of Our Hearts

From the Depths of Our Hearts: Priesthood, Celibacy and the Crisis of the Catholic Church, Benedict XVI and Cardinal Sarah Amazon £13.19

Piers Shepherd writes for The Remnant : Priestly Celibacy has  been under sustained attack for several decades. In the wake of numerous cases of clerical sexual abuse, even some conservative Catholics have suggested that celibacy should be optional, always asserting that it is a mere disciplinary rule and not part of Catholic teaching. The authors of this powerful and moving book would beg to differ, arguing that the abandonment of celibacy would lead to a radical and disastrous transformation of the Church. And given that the authors are the Pope Emeritus and the current Prefect of the Congregation for Divine Worship and the Discipline of the Sacraments, they are definitely men worth listening to.

Long before this book had been published considerable controversy arose over the former Pope lending his name to it, this being seen by some as an attack on the agenda of Pope Francis by his predecessor. However, both authors write in “a spirit of filial obedience to Pope Francis” and the present Pope is cited in support of their case.

The book is divided into two chapters, the first a spiritual meditation by Benedict, the second a far more extensive fleshing out of the central issues by Cardinal Sarah.

Benedict sees the current crisis over celibacy as rooted in a deficient understanding of Holy Scripture. Over the last few decades the Christological understanding of the Old Testament has been eroded. Many contemporary theologians have argued that Christ abolished the cultic priesthood, fulfilling the prophets” critique of the sacrificial worship of the Temple.

These theologians, says Benedict, “did not understand that Jesus, far from abolishing the worship and adoration owed to God, took them upon himself and accomplished them in the loving act of his sacrifice.” Benedict outlines the evolution of the Old Testament priesthood, which was restricted by familial descent, into the new vocational priesthood centred on the sacrifice of Christ. As a result of Christ’s sacrifice on the Cross, the Body of Christ becomes the new Temple after his Resurrection. “In the celebration of the Eucharist, the Church and even humanity are ceaselessly drawn into this process and involved in it. In the Cross of Christ, the critique of worship by the prophets definitively reaches its goal.” 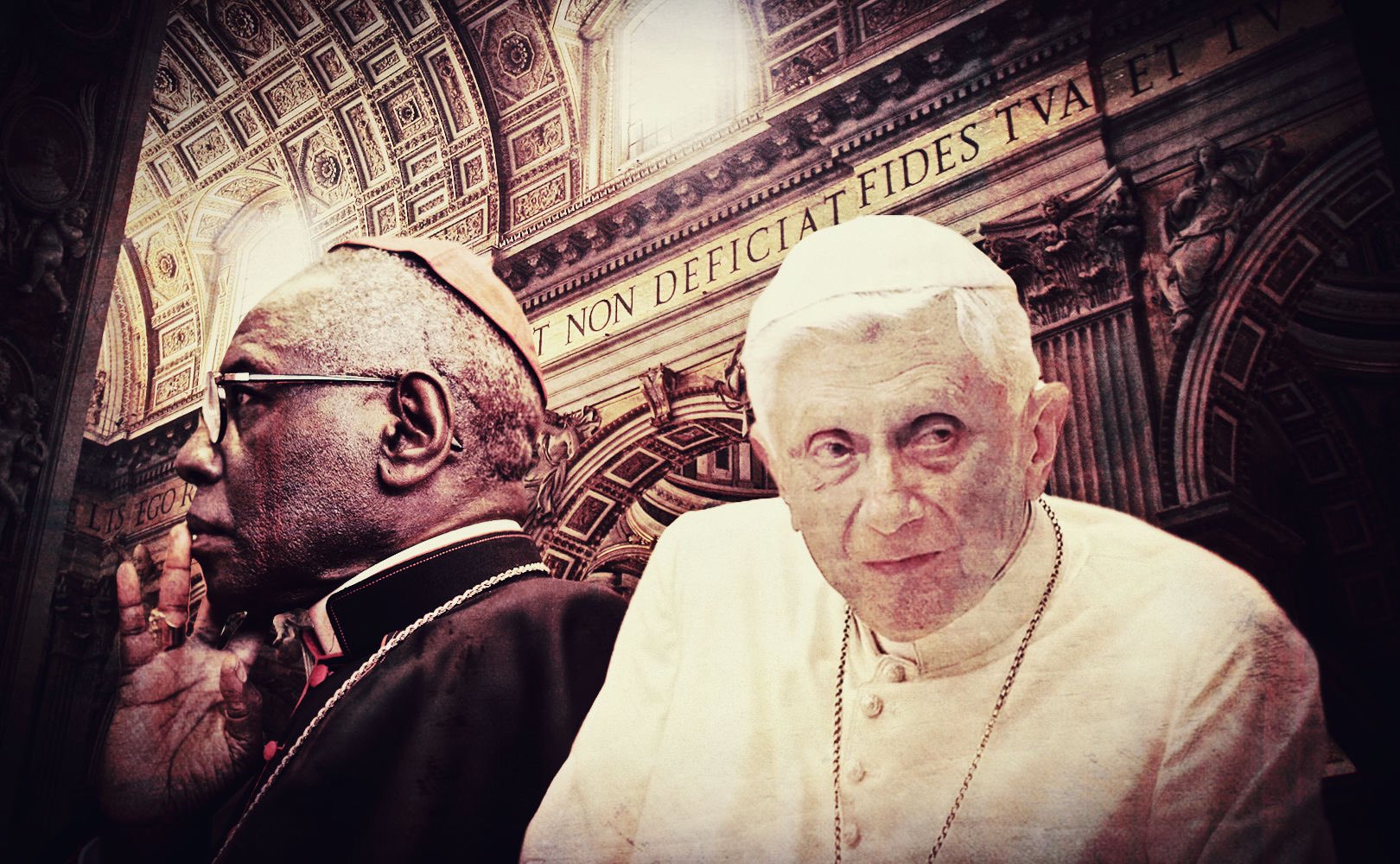 The priests of Israel were required to be sexually abstinent during the time when they conducted worship, but since this was only at set times during the year, marriage and priesthood were compatible. But in the New Dispensation a priest’s principle role is to offer the sacrifice of the Eucharist which he does on a daily basis. Thus, the functional sexual abstinence of the old priesthood becomes the ontological sexual abstinence of the new one. Marriage involves one’s whole life, but because a priest must now offer daily sacrifice this requires “exclusivity with regard to God.” Therefore, marriage and priesthood are incompatible.

This vision of priesthood was challenged by the Protestant reformers and more recently by radical theologians in the aftermath of Vatican II. Whereas Christ united ministry and sacrifice, both Protestants and more recent “reformers” have sought to throw out the concept of sacrifice and reduce the priest to a simple minister, making celibacy unnecessary.

While Benedict acknowledges that the early Church did ordain married men, he states that following ordination these became “Josephite” marriages where the spouses were sworn to sexual abstinence. Later the ordination of married men was discontinued. Benedict states:

…the married state involves a man in his totality, and since serving the Lord likewise requires the total gift of a man, it does not seem possible to carry on the two vocations simultaneously. Thus, the ability to renounce marriage so as to place oneself totally at the Lord’s disposition became a criterion for priestly ministry.

Benedict’s section of the book is a profound scriptural meditation on the nature of the priesthood as well as a fascinating, enlightening and informative history lesson.

If Benedict provides the case from Scripture for celibacy, Cardinal Sarah gives us the evidence from Tradition and from pastoral experience.

In the context of the Amazon Synod it has been claimed that the sparsity of priests in that part of the world necessitates the ordination of married men. Sarah is the perfect man to refute this. He was born to pagan parents in Guinea, a poor and developing country and missionary territory. Experience of a shortage of priests was acute in Guinea, where the Marxist dictator Sekou Torre had expelled all foreign missionaries. As a young priest, Sarah travelled the country ministering to many people who had not seen a priest or received the sacraments for nearly 10 years. He provides us with moving and evocative descriptions of his work which are worth quoting at length:

…the Christians continued to teach the catechism to the children and to recite their daily prayers and the Rosary. They showed a great devotion to the Virgin Mary and gathered every Sunday to listen to the Word of God…I will never be able to forget their unimaginable joy when I celebrated Mass, which they had not experienced for such a long time. Allow me to state forcefully and with certainty: I think that if they had ordained married men in each village, the Eucharistic hunger of the faithful would have been extinguished. The people would have been cut off from that joy of receiving another Christ in the priest. For, with the instinct of faith, poor people know that a priest who has renounced marriage gives them the gift of all his spousal love.

How many times, while walking for long hours between the villages, with a briefcase-altar on my head, under the blazing sun, I myself experienced the joy of self-giving for the Church-Bride. While traveling through swamps in a makeshift canoe, in the middle of lagoons, or while crossing dangerous torrents where we were afraid of being engulfed, I felt quite palpably the joy of being entirely dedicated to God and available, given over to his people.

How I would love it if all my confreres could someday experience the welcome of a priest in an African village that recognizes Christ the Bridegroom in him: what an explosion of joy! What festivity! The songs, the dances, the effusiveness, and the meals express the gratitude of the people for this gift of self in Christ.

This is just one of the many wonderful passages scattered throughout this book. Sarah clearly has a much greater understanding of the needs of the Church in the developing world than the liberal German bishops who were driving the Amazon Synod. He states:

I am convinced that if a large number of Western priests or bishops are willing to relativize the greatness and the importance of celibacy, it is because they have never had the concrete experience of the gratitude of a Christian community. I am not speaking simply in human terms. I think that in this gratitude there is an experience of faith. Poor and simple people are able to discern with the eyes of faith the presence of Christ the Bridegroom of the Church in the celibate priest. This spiritual experience is fundamental in the life of a priest. It cures him forever of all forms of clericalism. Having experienced it in the flesh I know that Christians see in me Christ who is delivered for them, and not my limited person with its qualities and its many defects.

In objection to Sarah’s position one might cite the case of the Eastern Churches where married men are ordained. Sarah responds to this first by explaining the evolution of celibacy in East and West. Although the early church ordained married men, they were expected to be sexually abstinent following their ordination. When the Council of Elvira in the early 4th century decided to depose clergy suspected of having sexual relations with their wives there was no protest against this, suggesting that celibacy was already widely accepted. The Council of Trullo  of 691, which was never recognized in the West,  allowed married priests to have sexual relations with their wives, but this was a novelty says Sarah, which “appeared as a result of an error in transcribing the canons of the council that had been held in 390 in Carthage”. Sarah argues that in the Eastern Churches the married state and the priestly state have come into considerable tension:

The Eastern married clergy is in crisis. Divorce by priests has become a cause of ecumenical tension among the Orthodox Patriarchates…There are many Orthodox Christians who would never go to confession to a married priest.

The point about divorce is particularly effective. There is little more horrifying than imagining the scandal of your parish priest going through a painful divorce with all the bitterness and legal recrimination that is involved.

But, the advocate of married priests argues, wouldn’t the ordination of married men increase vocations? To Sarah, this is an illusion. He quotes Pope St Paul VI who stated: “We are not easily led to believe that the abolition of ecclesiastical celibacy would considerably increase the number of priestly vocations: the contemporary experience of those Churches and ecclesial communities which allow their ministers to marry seems to prove the contrary.” Further, Sarah cites historical examples which prove that the Church has been able survive even with a complete absence of priests. In Japan where all the priests were martyred or expelled, the faithful survived for two centuries without priests, baptising and catechizing and keeping the faith alive. Sarah writes:

Each generation of the Christians in Japan taught the three signs by which they would recognize the return of the priests among them: “They will be celibate, they will have a statue of Mary, they will obey the Pope of Rome.” Intuitively, the believers had identified priestly celibacy as a “mark” revealing the nature of the priesthood and of the Church.

Sarah suggests that the problem in the Amazon may have something to do with what is being preached. He notes that there has been a massive increase in vocations in parts of Africa. Where the Gospel and the teachings of the Church are preached vocations flourish. They do not flourish when the faith is de-emphasized in favour of social justice issues as has been the case in parts of South America.

This book is a salutary reminder of what the priesthood really is, a sacrament not an institution and so much more than a “ministry”. Both authors pepper their chapters with profound and beautiful statements. The book gave me a new appreciation for the sacrifices that our priests make. It is truly a joy to listen to two titans of the modern Church reaffirming their commitment to living a difficult teaching.

Pentin’s new book leaves us asking more questions about the Petrine Office, not just who might succeed Francis

The Rosary in 50 pages

What Catholics need to know about Islam

Robert Spencer writes for Jihad Watch :    William Kilpatrick, who taught for many years at Boston College and is the author of several books about cultural and religious issues, has an important new book Read more…