UNITED STATES Why were witches involved in the protests?

Tradition, Family & Property writes — The recent protests were supposed to be rallies of concerned Americans who were horrified by the death of George Floyd. However, many protests degenerated into riots that destroyed parts of American cities. Unfortunately, many capitalized on the events to present other agendas. People who have absolutely nothing to do with the issue of community policing are hoping to hijack the debate.

Thus, the left has used the occasion to bring together ecologists, socialists, feminists, LGBTQ activists, pro-abortion advocates and others to push their false class struggle narratives upon the American public. Less known, however, is the involvement of darker forces. Satanists and witches were invoking dark powers to aid those participating in the violence.

The witches do not hide their involvement in the violent protests. Mashable reports that witch’s covens are actively engaged in hexing police, whom they accuse of brutality. They especially target those who are risking their lives to stop the riots. The witches also cast spells asking protection for protesters that confront the police. Witch activists used their dark arts as cutting edge weapons for those who want to engage in a more spiritual class warfare.

The hashtag #witchesforblm serves as a meeting place for practicing witches who want to learn how to cast protection spells, draw occult sigils and hex police. Five days after the hashtag started, it garnered 10 million views on the TikTok app.

The postings often include videos of witches casting spells or even acting out what they believe will happen to the police they target. The hexing can get very personal as the witches teach others to write down the names of individual police officers on papers, which are then burned with black candles. The hexes aim to bring misfortune to the officers already at risk while defending the city from disorder.

Mixing Politics and the Occult

The witches are part of a growing movement mixing politics and the occult. Numerous books of spells have been published since the 2016 elections advising occultist activists how to invoke the powers of darkness for political causes. Witches and satanists are appearing more often in public to push their agenda and display their scorn for God and His Law.

Such occult activism appears at odds with past leftist policies. The left used to follow a secular outlook that did not recognize spiritual powers of any kind. It always tried to keep politics and Christianity separate by labeling Christian action as superstitious. However, the left is now welcoming witches and occultists with their dark arts into the public square. Their involvement in the recent protests should surprise no one.

The Occult and Satanism in America

The secular media tend to make light of these actions, seeing them as almost curiosities. They do not believe witches have real powers and see them as malcontents against Christianity. However, the secular left also has no problem accepting them into their ranks despite their disbelief in the supernatural. The occult’s story of the devil oppressed by an Almighty God fits into their tired class struggle narrative and feeds their disdain for God.

The Fight Between Good and Evil

Religious Americans have no problem understanding the presence of the occult in this fight. If Christian prayers to God can affect events, then the invocations to the devil also can have major consequences. Indeed, Christians have long defined history as the fight between the forces of good and evil. Wherever chaos, hatred and agitation exist, the occult can be expected to have its role. It was the saving action of Christ that conquered the devil and sin and prepared the way for Christian civilization. 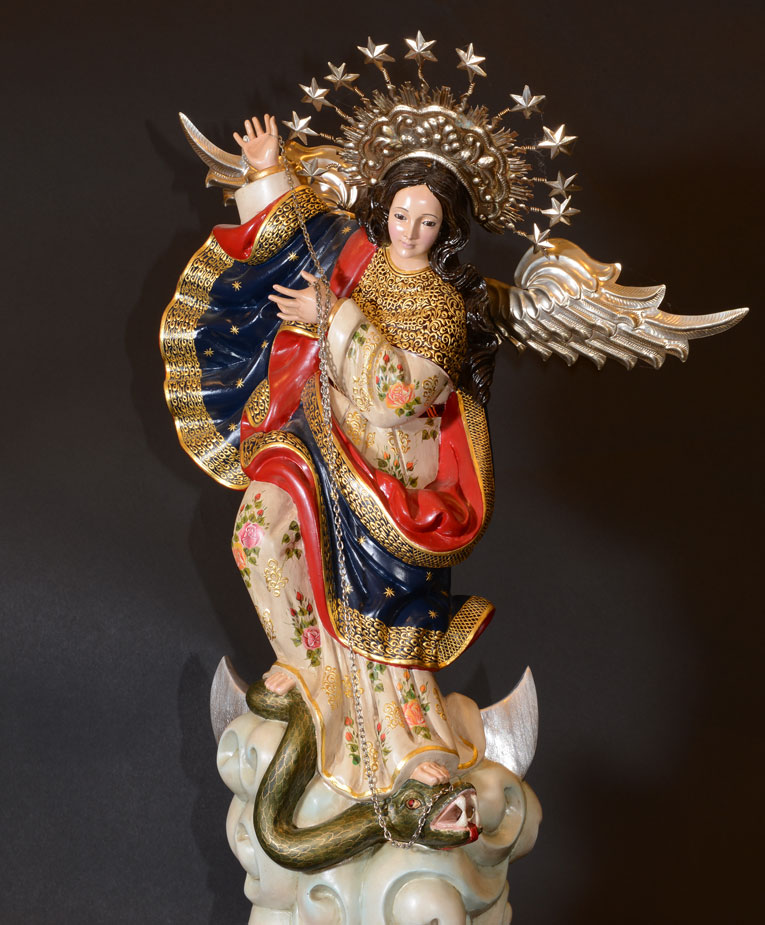 Our Lady of the Apocalypse
“I will put enmities between thee and the woman, and thy seed and her seed: she shall crush thy head, and thou shalt lie in wait for her heel.” (Genesis 3:15)

This is why the involvement of witches in the protests is so troubling to those Christians who understand the full implications of dark magic. Their action involves real forces that are dangerous and sinister. The Catholic Encyclopedia defines occultist magic as “the art of performing actions beyond the power of man with the aid of powers other than the Divine.” When taken seriously, its practitioners expect and obtain the interference of demons or lost souls for evil ends. The Church admits that spirits other than God can interfere in events, although never without God’s permission. Prayers of exorcism aim to limit the devil’s action over individuals and situations.

Science Confirms: Angels Took the House of Our Lady of Nazareth to LoretoIn the present crisis, the last thing needed is occult involvement like the witch’s spells and incantations. This will only increase the chaos and conflict. Satan is the spirit of division and hatred. America now needs to turn to God to defeat the actions of Satan, who prowls about seeking the ruin of souls and whole societies.

Pete Baklinski reports for LifeSiteNews — A homosexual group that campaigns for the Catholic Church to accept homosexual “marriage,” sodomy, and adoption of children by same-sex couples has been given a free pass to operate Read more…