Christopher Ferrara writes for The Remnant  — With the decision in Soos v. Cuomo, federal district Judge Gary L. Sharpe has removed religious gatherings from the virtual ghetto in which Governor Cuomo, his Attorney General and New York’s Mayor Bill de Blasio had placed them under Cuomo’s crazy-quilt scheme of executive orders by which he is enforcing his increasingly indefensible, and in many applications patently ridiculous, COVID-19 lockdown.

Before this decision, religious gatherings alone were confined to 25% of building capacity while secular businesses, manufacturing facilities, nonprofits, office environments of all kinds and even restaurants with permitted tables of ten people—facing each other while eating and talking without masks—were allowed either 100% or 50% occupancy.

At the same time, Cuomo, de Blasio and a host of other public officials throughout the state were applauding, approving and even participating in mass gatherings, often numbering in the tens of thousands, to protest the death of George Floyd, to promote Black Lives Matter, and to celebrate Juneteenth.  So much for Cuomo’s outdoor gathering limits of 10 or 25 people, depending on the “phase” or region of his “New York on Pause” plan.  The gathering limits that were supposedly necessary to “save lives” were forgotten in an instant once the favored protests and celebrations began, thus revealing that his whole “social distancing protocol” is a sham.

Yet Cuomo continued to insist that he has the right to place tight limits on the gatherings he disfavors, literally sneering at a reporter who dared to ask him how he could forbid an outdoor high school graduation ceremony at the same time he applauds thousands marching and standing shoulder-to-shoulder in the streets and plazas of New York’s major cities.  We quoted Cuomo’s reply in our complaint as evidence of his arrogant abuse of power:

I mean, did you hear anything that we’ve been talking about for the past 96 days?  Look, I don’t want to be difficult.  It’s a Pakistani immigrant family that wants to have a graduation. I get it. It’s not really relevant that they’re from Pakistan….

We went through New Rochelle, Westchester. People went to a ceremony. They were having celebration and a religious ceremony… Yeah, people died. People died, right? So, yeah I know, everybody wants to go to a high school graduation. I get it. Not if they’re gonna die. Right?[1]/ (emphasis added)

So, high school graduations kill people, but not a closely packed gathering of 20,000 singing and shouting George Floyd protesters, covering the entire span of the Brooklyn Bridge, as our papers also showed: 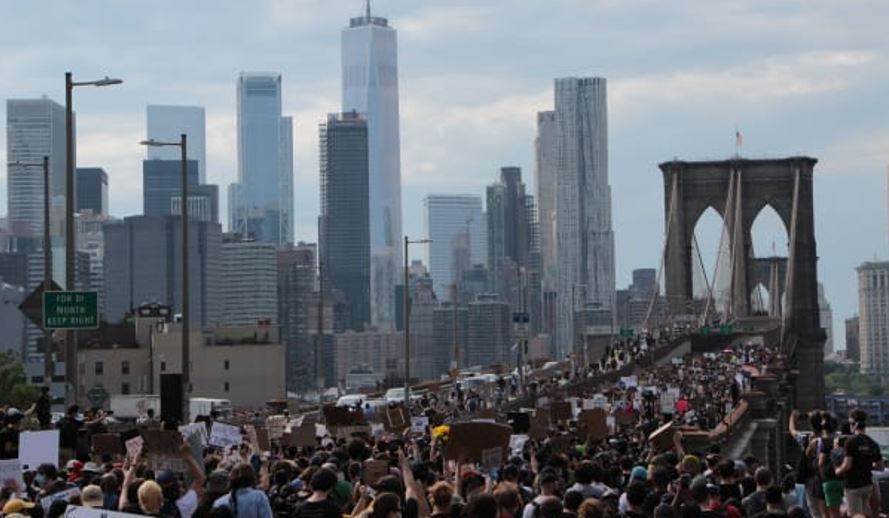 The Court has rectified this outrageous official hypocrisy by striking down all numerical limits on outdoor gatherings, including religious gatherings, and prohibiting Cuomo and de Blasio from imposing greater occupancy limits on churches and synagogues than they do on businesses in “Phase 2” of Cuomo’s regime.  All in all, the decision rightly recognizes the truth that ought to guide every federal judge who confronts the same sort of official hypocrisy in the few states that still maintain rigid COVID-19 lockdowns. To quote Judge Ho of the Fifth Circuit Court of Appeals:

The First Amendment does not allow our leaders to decide which rights to honor and which to ignore. In law, as in life, what’s good for the goose is good for the gander. In these troubled times, nothing should unify the American people more than the principle that freedom for me, but not for thee, has no place under our Constitution.

The tide may be turning against the COVID-19 lockdown paradigm, which, as the number of COVID-19 deaths plummets even in New York, is increasingly revealed as a muddle of absurd inconsistencies reflecting arbitrary official value judgments rather than a neutral and generally applicable public health measure.  But not according to the media, who labor to keep fear alive with breathless reporting about “spikes” in the “number of cases” in the South and Far West— where lockdowns were comparatively modest and were lifted early. But “rising cases” means only more positive test results obtained from people primarily in the 18-40 age group who were never tested before, have little or no risk of serious complications from the virus, and are largely asymptomatic.

“You played politics with this virus, and you lost,” huffed Cuomo concerning governors who rejected his draconian lockdown strategy. Nonsense. Cuomo’s attempt to place 19 million people under virtual house arrest arguably killed people rather than “keeping them safe.”  Cuomo himself all but admitted back in March that his unprecedented decision to quarantine an entire state’s population was a total debacle:

What we did was we closed everything down. That was our public health strategy, just close everything. All businesses, all workers, young people, old people, short people, tall people, every school, close everything.

And the same can be said for Governor Murphy’s substantially identical lockdown regime in New Jersey, which I am also in the process of challenging in another suit brought by the Thomas More Society on behalf of an SSPX priest and an Orthodox rabbi, as I have noted in a previous article.

In fact, as this source shows, New York and New Jersey alone account for more than 40% of the total number of deaths attributed (however loosely) to the virus in the entire country, and the majority of that 40% represents deaths in long term care facilities. Both Cuomo and Murphy are directly responsible for many thousands of deaths in the nursing homes to which they deliberately consigned COVID-positive elderly residents, thus guaranteeing that they would infect others who would die, given their already life-shortening comorbidities—including my own father, as I have testified on these pages.

As this source demonstrates, the death rate per 100,000 from  (or “with”) COVID-19 in New York under Cuomo’s lockdown is more than ten times that of Florida, where a grand total of five people are reported to have died on account of the virus on June 26, according to Florida’s COVID-19 dashboard. Yet the media are now screaming that Florida must lock down again because of a “record number of COVID cases,” meaning a record number of tests performed on people who will never see a hospital, much less die on account of the virus.

“It was never politics. It was always science,” says Cuomo of his lockdown. He apparently thinks the public’s credulity has no limit.  Thousands died on account of his arrogant blunders, yet he mocks other governors for not following his example. “Shameless” doesn’t begin to describe this remorseless character, the tyrannical enforcer of “social distancing” who berates a reporter for politely inquiring about why he will not permit socially distanced high school graduations while he applauds thousands marching in the streets and crowding into plazas with only inches between them.

As the pandemic wanes, dramatically rising numbers of positive tests with no dramatic rise in deaths, but rather a continuing decline in deaths toward zero, should be hailed as good news because the data increasingly demonstrate an overall lethality rate approximating that of seasonal influenza and the development of herd immunity. Instead, the test results are trumpeted as an apocalyptic “surge in COVID cases” by the media and their political partners while the hospitals remain empty or nearly empty of COVID patients.

Running low on grist for their fear mill, the same operatives now desperately agitate for the mandatory imposition of pointless mask-wearing—six months after the virus first appeared! This is the only way to exact continuing visible compliance with lockdowns that—surely at this point at least—are revealed as nothing more than an exercise of power for its own sake.  A righteously indignant citizen has denounced the fraudulent mask mandate in a searing two-minute jeremiad that ought to be preserved for the historical record of this epochal folly.

Meanwhile, Catholics should celebrate every judicial victory as at least one small step toward ending this insanity. But make no mistake: the proponents of Lockdown Forever and Masks on Every Face have no intention of abandoning without a fight what they perceive as a winning strategy for the creation of a “post-COVID” world. A world in which thousands may march for politically correct causes but people of faith are scattered by the police and must fight to regain the full use of their places of worship. A world in which one is allowed to buy pork chops at a crowded Walmart, while the local butcher faces fines or jail time if he dares to let a few people inside his shop to buy the same product. A world in which the Fortune 500 ride high, while small businesses are driven into bankruptcy on the pretext of “limiting the spread” of a virus.

If anyone has not seen before that the controversy over lockdowns has devolved into a political struggle, there is no excuse for not seeing it now.  If you have any remaining doubts, just watch the Mask Brigades on CNN, in the White House press room, and in the crowds of iconoclasts now marching and squatting in all of America’s major cities.

“Governor Cuomo and Mayor de Blasio could have just as easily discouraged protests, short of condemning their message, in the name of public health and exercised discretion to suspend enforcement for public safety reasons instead of encouraging what they knew was a flagrant disregard of the outdoor limits and social distancing rules,” the judge added. “They could have also been silent. But by acting as they did, Governor Cuomo and Mayor de Blasio sent a clear message that mass protests are deserving of preferential treatment.”

Thomas More Society Special Counsel Christopher Ferrara celebrated the decision and called Cuomo’s executive orders a “sham” that “went right out the window as soon as he and Mayor de Blasio saw a mass protest movement they favored taking to the streets by the thousands.”

“Suddenly, the limit on ‘mass gatherings’ was no longer necessary to ‘save lives,’” Ferrara said in a statement to Fox News. “Yet they were continuing to ban high school graduations and other outdoor gatherings exceeding a mere 25 people.”