UNITED STATES As US bishop excoriates Trump, bishops in Middle East and Nigeria applaud his executive order on religious freedom

Robert Spencer reports for Jihad Watch  – Wilton Gregory’s religion is not Christianity, but Leftism, as is the case with many of his colleagues as well. And so his primary concern is not stopping the persecution of Christians, but stopping Donald Trump. In contrast, Ignace Joseph III Younan, Matthew Hassan Kukah, and Yousif Habash are Christians who live in areas where Christians have suffered severe persecution by Muslims. Thus they have a more realistic view. 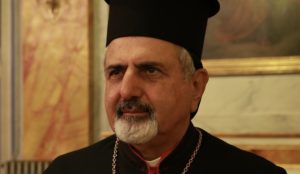 ROME — The content of President Donald Trump’s new executive order to promote religious freedom overseas was greatly overshadowed by the controversy that erupted at the time of its signing June 2 — but Church leaders in the Middle East and Nigeria contacted by the Register have enthusiastically welcomed the document.

The executive order also aims to develop recommendations to “prioritize the appropriate use of economic tools” to advance religious liberty “in countries of particular concern.”…

Archbishop Wilton Gregory of Washington, noting the chaotic clearing of crowds the day before so that Trump could visit the fire-damaged St. John’s Episcopal Church in the city, said he found it “baffling and reprehensible” that the shrine would allow itself to be “so egregiously misused and manipulated.”…

“We welcome the recent Executive Order on Advancing Religious Freedom,” said Chaldean Archbishop Bashir Warda of Erbil, Iraq — an area that has lost hundreds of thousands of Christians since the 2003 Iraq War and the 2014-2017 invasion by the Islamic State group. “Having directly experienced persecution, crimes against humanity and genocide because of our commitment to our faith, we are deeply grateful for the efforts of the administration to maintain an international focus on this issue.”

Syriac Catholic Patriarch Ignace Joseph III Younan told the Register he welcomed the “courage” President Trump showed in signing the order after visiting the Shrine of St. Pope John Paul II and hoped “there will be an effective follow-up” in the form of defending and preserving civil rights, creating jobs, promoting development and helping foster a true religious dialogue that they “dream of.”

In a June 5 statement, the patriarch said he also firmly hoped “effective humanitarian programs” announced in the executive order would “insure the survival of my community, as well as Christian minorities, in order to stay rooted in their ancestral homeland.”

Bishop Matthew Hassan Kukah of Sokoto, a region of extensive persecution in Nigeria, said the executive order put the persecution of Christians and other religions “on the front burner” — something he viewed as a “welcome development especially in the face of the crippling secularism that is trying to push religious identity to the sidelines.”

Iraqi Syriac Catholic Bishop Yousif Habash, originally from Mosul and now at the Syriac Catholic Eparchy of Our Lady of Deliverance of Newark, said the order “is certainly very positive and worthy of consideration and appreciation.” Christians do not “wait for aid from far away to survive,” he stressed, but added that if such aid comes from “goodwill,” then it “certainly benefits Christians and serves them.”…

Patriarch Younan stressed the extent of the “horrific persecution” Syriac Catholics have faced over the past decade in Iraq and Syria — something he said he and Chaldean Catholic Patriarch Louis Sako of Baghdad told Vice President Mike Pence at a recent meeting. It is a “matter of survival,” he told the Register.

“We need effective solidarity from the U.S.A.,” which “should cherish religious freedom as a gift from God.” This needs to be “shown in deeds, not only words, avoiding ‘politically correct language’” that he said has “spread within Western politics, media and even within the Church.”

In his June 5 statement, Patriarch Younan asked President Trump to “help restore peace and reconciliation” to Syria and make it a priority to lift economic sanctions affecting the innocent. “Wherever religious freedom is guaranteed, sociopolitical freedoms will sooner or later follow,” he said….

Bishop Habash said what is “really very painful” is that Western governments “do not want to give importance to the Christian presence in the Middle East.” But in America, he said, “the pulse of Christianity is still alive and well,” and without Christianity, the world “could be a hell that is intolerable.”

This is why, he said, “evil wills fight America’s existence, the American spirit and its optimism, because America still believes that it is a nation under God.”

He added that if the U.S. wishes to “compensate for its mistakes that caused great losses to the Christians of Iraq, there is no other way and no other solution except with the support of Christians in the Middle East, especially in Iraq and Syria.”…

ChurchMilitant.com reports— A diocese is claiming it made a mistake after encouraging Catholics to watch non-Catholic religious services. A now-deleted web-page for the diocese of Kansas City-Saint Joseph listed options for non-Catholic places of worship that Read more…

TURKEY Hagia Sophia: Icons will be concealed by curtains and lighting, tourists will be required to remove shoes

Robert Spencer reports for Jihad Watch —  Once again, as in the first conversion of the great cathedral to a mosque, attempting to show the superiority and victory of Islam. All tourists will henceforth be Read more…

TURKEY Religious Affairs top dog: ‘Hagia Sophia shouldn’t only be place of worship,’ should be ‘a madrasa inside’