The president and Mrs. Trump visited the shrine to both commemorate Pope Saint John Paul II’s 100th birthday two weeks ago and the 41st anniversary of the modern day saint’s historic Mass at Victory Square in Warsaw. Melania Trump is the first Catholic First Lady since Jacqueline Kennedy.

After his visit to the shrine, established and operated by the Knights of Columbus, President Trump planned to return to the White House to sign an executive order on religious freedom.

“I find it baffling and reprehensible that any Catholic facility would allow itself to be so egregiously misused and manipulated in a fashion that violates our religious principles, which call us to defend the rights of all people even those with whom we might disagree,” said Gregory in a statement released the very hour of Trump’s visit.

“Saint Pope John Paul II was an ardent defender of the rights and dignity of human beings,” continued Gregory.  “His legacy bears vivid witness to that truth. He certainly would not condone the use of tear gas and other deterrents to silence, scatter or intimidate them for a photo opportunity in front of a place of worship and peace.”

A spokesperson for the shrine indicated on Tuesday that the White House had scheduled the president’s visit long before the recent violent uprisings in cities across the nation, countering Gregory’s implication that this was nothing more than a political photo op.

“This was fitting given St. John Paul II was a tireless advocate of religious liberty throughout his pontificate,” the Shrine said in a statement. “International religious freedom receives widespread bipartisan support, including unanimous passage of legislation in defense of persecuted Christians and religious minorities around the world.”

He added that “the shrine welcomes all people to come and pray and learn about the legacy of St. John Paul II.” 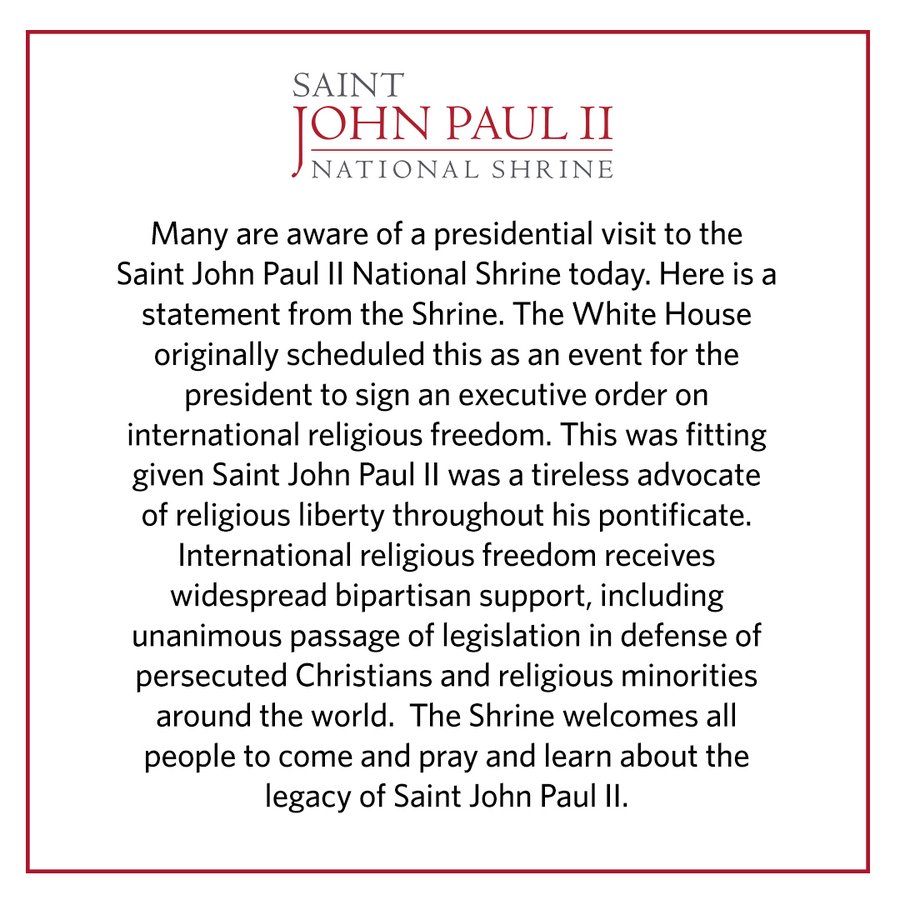 In declaring that the shrine and the president are in “violation of Catholic principles,” Archbishop Gregory chose to overlook Donald Trump’s record as the most pro-life president in the history of the nation, and his strong efforts to protect religious liberty.

Trump’s pro-life gains include allowing states to defund Planned Parenthood of Title X and Medicaid funds; defunding the United Nations Population Fund and very recently the pro-abortion World Health Organization; reinstating and expanding the Mexico City Policy preventing taxpayer money from funding abortions overseas; creating a new office for conscience protection at the U.S. Department of Health and Human Services; and strengthening enforcement of federal laws protecting the conscience rights of health care workers who do not want to participate in abortion.

Trump also declared churches “essential” on May 22, telling state governors to allow them to reopen as coronavirus lockdowns begin to loosen. All public Masses in Washington, D.C. remain cancelled.

The president has long been the object of criticism by many Catholic prelates because of his strong stance on immigration and secure borders.

Last summer, in his first public statement following his installation as Archbishop of Washington, Gregory accused the president of “diminishing our national life.”

Gregory’s criticism follows similarly harsh words from the Episcopal Bishop of Washington, who said she is “outraged” by Trump’s visit to historic St. John’s Church yesterday after the venerable church complex across Lafayette Square from the White House was torched by violent protesters the previous night.

“I am the bishop of the Episcopal Diocese of Washington and was not given even a courtesy call, that they would be clearing [the area] with tear gas so they could use one of our churches as a prop,” the Right Rev. Mariann Budde, Episcopal bishop of Washington, told The Washington Post.

“Everything he has said and done is to inflame violence,” asserted Budde. “We need moral leadership, and he’s done everything to divide us.”

The president’s visits to two important sites of Chrisitianity’s presence in the nation’s capital have left Catholics divided.

“Let’s remember what this area looked like the night before,” said Fox News host Martha MacCallum. “You see the President standing in front of those boarded up windows at St. John’s when smoke was pouring out of there” not long before.

“I thought that maybe they were going to go into the church and maybe say a prayer,” continued MacCallum, who said she was surprised that the President and his entourage quickly turned and walked back to the White House.

“It is what it is,” she said. “It was a moment where he wanted to make it clear that the nation needed to retake that area from the violence that it saw the night before.”

One Catholic woman from Charlotte, North Carolina who asked to remain anonymous because of employment concerns told LifeSiteNews that it would have been better if the President had prayed in front of St. John’s Church, “in the tradition of the presidents before him.”

“I wish he had not held the Bible up. It was poorly orchestrated from a PR perspective,”  she said, reflecting the thoughts of many.

“What WAS effective was his calm and defiant manner of reclaiming what the looters tried to destroy,”  she continued. “The female bishop who spoke out showed no appreciation for his desire to defend and protect her and her Church. Personally I liked the determined and defiant, frankly courageous walk there. Just fell short by not saying anything or reading a relevant verse or praying.”

Gregory has a long record of supporting liberal causes. During his tenure as Archbishop of Atlanta, Gregory did nothing to stop a pro-LGBT parish from promoting, participating in, and hosting a booth at, the Atlanta “Pride Parade.” Gregory also personally invited pro-gay priest Father James Martin to give a speech at the Shrine of the Immaculate Conception, titled “Showing Welcome and Respect to LGBT Catholics,” in 2018.

He has made statements suggesting support for allowing Catholics living in a state of adultery to receive Holy Communion. He said Mass and gave a homily at 2014 and 2015 annual retreats for Fortunate Families, a pro-homosexual dissident group. The retreats were held at the chancery of the Atlanta archdiocese.

While president of the United States Conference of Catholic Bishops, Gregory appointed a pro-abortion attorney to the USCCB’s National Review Board. The attorney, Pamela Hayes, has made donations to the pro-abortion lobby EMILY’s List, as well as to pro-abortion politicians John Kerry and Hillary Clinton.

In 2019, Gregory offered a funeral Mass for pro-abortion journalist Cokie Roberts during which pro-abortion Speaker of the House Nancy Pelosi delivered a eulogy from the lectern in the sanctuary of the Cathedral of St. Matthew the Apostle.

In his homily, Gregory praised Roberts as an “extraordinary, professional servant of the truth.”

The left-wing commentator “believed in God’s word…accepted it and fashioned her life around that word,” said Gregory.

China continues to wipe out crosses