Paul Smeaton reports for LifeSiteNews –  A U.K. school has apologized after parents complained about children as young as 11 being given homework asking them to define terms such as hardcore pornography and transexual pornography.

Archbishop Sentamu Academy, a Church of England school in Hull, “apologised for any offence caused” after angry parents complained about the homework, the Daily Mail reports.

One mother told the U.K. newspaper that searching for these phrases online, in order to research the definitions, would have “destroyed” her eleven year old daughter’s mind and “scarred her for life.”

“My daughter is still very much a child, we’ve still got magic elves, her bedroom is done in My Little Pony. She is very innocent and naive,” she said.

“She was only in primary school last year living her best life, now she is being asked to search for hardcore pornography.”

The mother said that she had seen complaints about the homework from other parents on a Facebook group and so had prevented her daughter from looking up the terms.

“They’re a very religious school as well, so how can they say they are a religious school but condone writing something like this in the book? I can’t get my head around it. I don’t get the benefit from it, apart from scaring the kids.”

Head teacher Chay Bell defended the homework, but said that he had asked “that no future PSHE materials contain any potentially sensitive content and will ensure all materials are fully age-appropriate.”

“The PSHE materials that we share with students are produced in line with government guidance, the PSHE Association Programmes of Study and the Sex Education Forum’s definition of Sex Education,” Bell said.

Bell denied that children had been asked to research the terms online, saying that “all the answers to the questions posed are contained in the teacher-produced materials we shared.”

The BBC report covering the story notes that “a spokesman for the Department for Education said it was a matter for the school and had no further comment to make.”

Sex education in U.K. schools is coming under increasing scrutiny from various groups concerned with the content children are being exposed to.

The Proud Trust, another LGBT group creating educational content for U.K. schools, has recently attracted attention for having created a game where children as young as 13 make cardboard six-sided dice with the words Vulva (including vagina), Penis, Anus, Mouth, Hands/Fingers, and Object on each side. The instructions explain: “The game is to roll the two dice and then the group will discuss what sexual activity is possible using the two words that face upwards.” 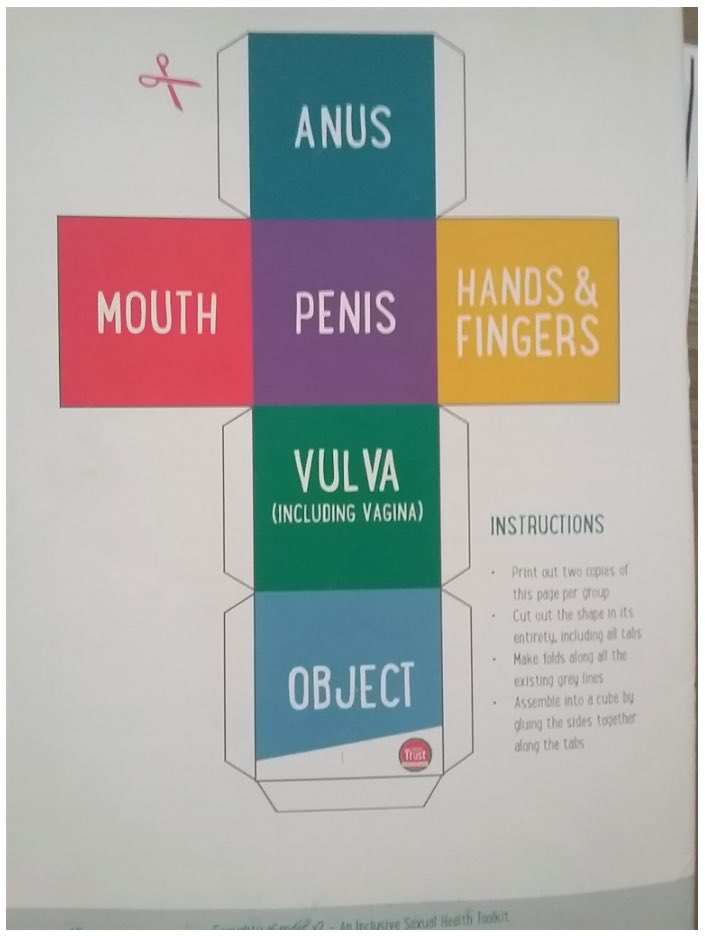 Last year, the Government Equalities Office sponsored guidelines produced by Stonewall, a U.K. LGBT activist group roughly equivalent to the Human Rights Campaign (HRC) in the United States, which encouraged British primary schools to embed gay, lesbian, and transgender themes and examples into every subject area and every grade level.

From this coming September, new relationships and sex education (RSE) courses had been scheduled to take effect in the U.K. This has now been delayed until September 2021.

The government has made it clear that pupils must receive teaching about LGBT relationships at some point while they are at school. For schools that adopt Stonewall’s guidelines, this would mean that children as young as five would be reading about families headed by two lesbians and/or two homosexual males in subjects such as math, science, and geography.

Writing in The Conservative Woman, Belinda Brown argues that the government’s offer to consult with parents on compulsory RSE lessons “is a totally inadequate sop.”

“Firstly, what the Department for Education is offering parents is not ‘consultation’, but ‘engagement’. The aim is to provide parents with the opportunity to ‘feed in their views on the school’s proposed Relationships Education policy’,” Brown explains.

“However, they make it clear that while this ‘engagement’ may influence the timing and methods of schools’ approach to certain topics, there is no requirement to influence the content in any way.”

Dr. Tom Rogers of the Safe at School campaign has said that it is imperative that parents take advantage of the delay in the implementation of the courses to call on their child’s school to hold a proper consultation.

“Parents should not have any form of Relationships and Sex Education foisted upon their children without being properly consulted,” Rogers said.

“We are hearing from parents that some schools are merely presenting parents with a policy and a curriculum for these new compulsory subjects and counting this as a consultation. This approach is completely inadequate and amounts to a slap in the face to parents,” he continued.

“A proper consultation should result in schools truly respecting families which do not want their children to be exposed to explicit sexual content and teaching on same-sex relationships in the classroom. This must be accurately reflected in the policy and the teaching materials used in the school.”

Caroline Ffiske argues in a June 15 article that “[a]ll schools should also be required to place their RSE material on their websites. Why not? There is nothing that schools should want to hide.”

Ffiske highlights a recent letter from Conservative peer Baroness Nicholson of Winterbourne Gavin Williamson the U.K. Secretary of State for Education regarding the government’s RSE guidelines.

“Unfortunately, as offered, the Guidelines leave the door open for anyone to teach whatever they want at any age they consider appropriate,” the baroness writes.

“We must surely consider carefully the state’s role in telling schoolchildren that a bearded man with a penis can be a lesbian and any girls and boys deviating from 1950s gender norms are in the wrong body.”