TURKEY Religious Affairs top dog: ‘Hagia Sophia shouldn’t only be place of worship,’ should be ‘a madrasa inside’

Robert Spencer writes for Jihad Watch — Training a new generation of jihadis and Islamic supremacists inside what was the foremost cathedral in Christendom for nearly a millennium — what could be more deliciously illustrative of the triumph and supremacy of Islam? 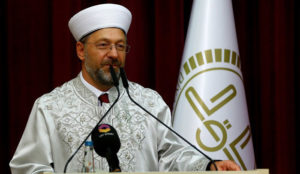 “Turkey’s Top Imam Now Wants to Build an Islamic School at Hagia Sophia,” by Tasos Kokkinidis, Greek Reporter, July 12, 2020 (thanks to The Religion of Peace):

Turkey’s top imam, Ali Erbas, said on Saturday that he now hopes to build an Islamic school at Hagia Sophia which was converted to a mosque on Friday.

Erbas hailed the decision by President Erdogan to “break the chains” on the spiritual center of Orthodox Christianity and claimed that a project to create an Islamic school (madrasa) is already underway.

“Hagia Sophia should not only be a place of worship. Let be there be a madrasa inside,” he said adding that Turkey’s Presidency of Religious Affairs (Diyanet), which he leads, has “already started working on the project.”…

UNITED STATES BLM and Antifa rioters burn Bibles, but of course no Qur’ans

Robert Spencer reports for Jihad Watch –  The establishment media keeps telling us that these are peaceful protests and that Black Lives Matter is simply a slogan opposing racial injustice. The rioters keep showing the Read more…