Robert Spencer reports for Jihad Watch — Zaimoglu was likely referring, as Sofuoglu did, to “images of the Byzantine empress Zoe. The Christian ruler married several times and is said to have had different lovers.” But doctrinaire Muslims don’t approve of images of Jesus, Mary, and the saints either, so if Zaimoglu and Sofuoglu are heeded, the historic Byzantine icons in Hagia Sophia could be lost forever. 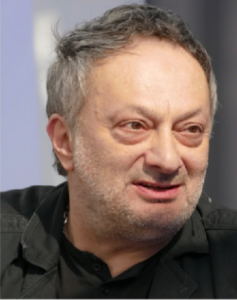 Feridun Zaimoglu – a professing Muslim and a writer with Turkish roots and a German passport — can gain something from the conversion of Hagia Sophia in Istanbul from a museum to a mosque. The Turkish historian is already demanding the removal of Christian mosaics, since Muslims should not have to pray under the image of a “whore”.

“I welcome when a god is worshiped again in a house of worship,” said Zaimoglu in an interview with his employer, for whom he publishes literary reviews and essays. “After all, Hagia Sophia was not built as a depository and showroom for cult objects,” said the Turkish-born writer.

Zaimoglu showed understanding for the decision of the Islamic despot Erdogan to convert what was once the most important church in the Christian West into a mosque, as well as for the fact that people – in this specific case he was probably only referring to his Muslim brothers in faith – were devoted to holy places. “We are talking about traditional history, about history turned to stone,” continued the writer. “But for now, there won’t be masses of tourists coming to Hagia Sophia and taking pictures all the time.”

Since pictorial representation of people is not allowed in the backward Islamic ideology, the historical Christian images of Mary, Jesus and Saints have to disappear during the Islamic prayer, which will take place tomorrow on Friday for the first time under media hype. Curtains will cover the mosaics during Islamic prayers in the former church, Erdogan’s government spokesman said. It has not yet been clarified whether the Turks will drill holes in the centuries-old mosaics to fasten brackets.

Turkish historian Ebubekir Sofuoğlu has already asked that the Christian mosaics be removed from Hagia Sophia, which has been converted into a mosque. “If the icons do not disappear from Ayasofya, this will be the first mosque to show the prostitute Zoe and prostitution,” wrote the Islamic zealot on Twitter. He alluded to images of the Byzantine empress Zoe. The Christian ruler married several times and is said to have had different lovers. The depictions are disrespectful, Sofuoğlu continues. “And the protection of these symbols and the nonsense has to stop.”

Critics fear that Hagia Sophia as a mosque could now be exposed to the dangers from which it was still protected as a museum. Muslims could feel called to destroy the easily accessible mosaics. So far, museum personnel have ensured that nobody came too close to them and that nobody could spray graffiti on the walls….

Jules Gomes reports for ChurchMilitant.com – A Dublin museum dedicated to Irish emigrants will remove a prominently displayed photograph of Planned Parenthood founder Margaret Sanger after a Catholic philosopher complained about her racist and eugenicist Read more…

Jules Gomes reports for ChurchMilitant.com – Thousands of Irish Catholics have signed a petition calling for the excommunication of Dublin’s archbishop after the primate of Ireland participated in Muslim prayers on Eid Al-Adha Friday citing Read more…