TURKEY Hagia Sophia: Icons will be concealed by curtains and lighting, tourists will be required to remove shoes

Robert Spencer reports for Jihad Watch —  Once again, as in the first conversion of the great cathedral to a mosque, attempting to show the superiority and victory of Islam. All tourists will henceforth be required to demonstrate their recognition of and respect for that. 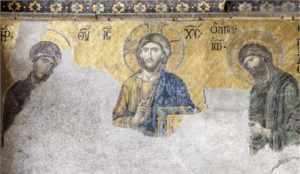 “Turkey to cover Holy Icons in Hagia Sophia with ‘special technology,’” by Paul Antonopoulos, Greek City Times, July 11, 2020 (thanks to The Religion of Peace):

The declaration of Hagia Sophia becoming a mosque has caused a shock all over the world, and it appears the only ones in glee are Turks and their media outlets.

Yeni Şafak spoke of a “resurrection” of Hagia Sophia and Türkiye reported on its front page “The suffering of the Hagia Sophia mosque is over. The 86-year-old chains are broken.” Sabah newspaper published the headline “Nostalgia for Hagia Sophia is over.”

According to Hürriyet, Hagia Sophia will be open for prayer but also for tourists who want to visit it. They said that icons and mosaics will be covered with special technology and lighting.

Specifically, special curtains will be used during Islamic prayer, while carpets will be placed on the floor which will be illuminated to darken the space and not show paintings.

This means that visitors to Hagia Sophia will have to take off their shoes to enter the temple….