TURKEY “A spectre is haunting Europe, the spectre of Turkish expansionism, set in motion by Erdoğan’s Islamist government”

Robert Spencer reports for Jihad Watch — The Lausanne Treaty defined the borders of the secular Turkish republic. Throwing it out would herald a new Turkish expansionism. In February 2018, Erdoğan declared his desire to reconquer the lands the Ottoman caliphate once ruled: “Those who think that we have erased from our hearts the lands from which we withdrew in tears a hundred years ago are wrong. We say at every opportunity we have that Syria, Iraq and other places in the geography [map] in our hearts are no different from our own homeland. We are struggling so that a foreign flag will not be waved anywhere where adhan [Islamic call to prayer in mosques] is recited. The things we have done so far [pale in comparison to the] even greater attempts and attacks [we are planning for] the coming days, inshallah [Allah willing].” 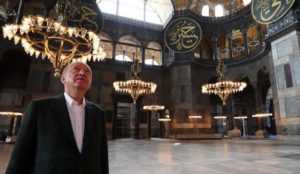 A spectre is haunting Europe, the spectre of Turkish expansionism, set in motion by President Recep Tayyip Erdoğan’s Islamist government and its ultra-nationalist allies stakeholding his iron rule. All the powers of old Europe, with the exception of France, have entered into a holy alliance to duck this spectre: the EU and ECB, Germany’s Angela Merkel and the U.K.’s Boris Johnson, Italy’s Giuseppe Conte and Spain’s Pedro Sanchez, The European Commission’s Ursula von de Leyen and the EU’s Josep Borrell, the Council of Europe, the European Court of Human Rights and NATO.

I have rephrased the famous introduction to Communist Manifesto, to underline the magnitude of the current and massively underestimated drama, of which Turkey is at the epicentre.

A militarised regime is taking shape in Anatolia as the world watches on at the expense of the well being of Turkish people. This regime is pursuing an expansionist order determined to stretch the country’s legal borders by means of a brute force.

If you think the recent reconversion of the Hagia Sophia into a mosque – a sad affair even in defiance of the verses of holy Quran – is just about the 6th century iconic site, think again.

The groundbreaking decision by the Erdoğan – Bahçeli alliance on the monument is only one major stone laid on the path to their plans pertaining to the centennial of Turkish Republic in 2023. Theirs is part of a major political choreography, based on bringing out of Pandora’s Box the ghosts of wars of the past. Let the borders of modern Turkey, drawn after the WWI go up for debate again and let the so-called National Pact (Misak-ı Milli), which is about reclaiming lands that now belong to Turkey’s southern and western neighbours, be brought to life, this alliance says.

The fact that the AKP cadres and pundits unleashed damnations and curses on the Lausanne Treaty even before the dust had settled on the Hagia Sophia reopening ceremony on Friday should be a wake up call for the world. That is if anyone is paying any attention to the constant escalation of the internal power rhetoric in Turkey.

It wasn’t a coincidence that Erdoğan and Bahçeli chose a specific date for the Hagia Sophia cemenony: The anniversary of the Lausanne Treaty, which was signed on July 24, 1923. So, it isn’t a puzzle anymore when Turks – in sympathy or opposition to the strongman of their country – kept hearing the phrase, ”a historic parenthesis that must be closed”. The parenthesis is the history of Turkish Republic, as envisioned and launched by its founding father, Mustafa Kemal Atatürk. Opening the gates of Hagia Sophia as a mosque at the same time paves the way for such a closure…

So, we are faced with the spectre in Turkey today, but the European apathy to what is taking place in the country is astonishing. The main reason for what will surely develop into a new European folly is clear: Behind closed doors, major EU representatives agree that Erdoğan regime is lesser of two evils. If Erdoğan’s fall will wreak havoc in Turkey, they maintain, incomparable to what happened to the former Yugoslavia, causing millions of Turks to flee west on to EU soil.

So, the Erdoğan regime is considered ”fine,” as it offers stability, even though the entire country -(to quote the main opposition leader Kemal Kılıçdaroglu – is ”an open-air prison.”

Thus, let us remain paralysed, they say, while they continue to appease Erdoğan, pretending everything is just fine. And let us watch, as Turkish irredentism gets ready to challenge the international order in the Eastern Mediterranean through militarised foreign policy….