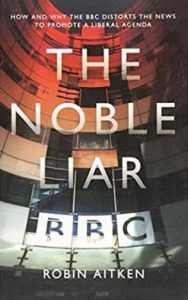 THE FAMILY EDUCATION TRUST write s~ The purpose of this penetrating critique of the BBC is to examine `why there is such a gulf between the world as the media presents it, and the world as most ordinary people experience it’ (p.10). Robin Aitken writes out of 25 years’ experience of working for the Corporation as a reporter and journalist at all levels from local radio to the Radio 4 flagship Today programme, and sets out to explain how the BBC has become so hostile to social conservatism and become an unthinking champion of liberal values.

The title of the book is derived from a concept found in Plato’s Republic, where a `noble lie’ is `a myth or an untruth, knowingly propagated by an elite, in order to promote and maintain social harmony or advance an agenda’. Aitken writes: ‘It is the contention of this book that the BBC, along with its media and establishment allies, has become the vehicle for the propagation of a series of noble lies in pursuit of a political agenda.’ (p.13)

He observes that, `There is no other organisation, in any sphere of national life, …which touches so many of us so directly and as often as the BBC.’ (p.22) He describes it as `a profoundly political organisation’ (p.29), – which enjoys the huge advantage of financial stability afforded by the licence fee. It has employed its unrivalled position to mock, marginalise and ignore the concerns of social conservatives. In so doing, it has exerted a profound influence on other British broadcasters, such that there is no national broadcaster in Britain which champions a conservative social agenda.

During the 1950s, broadcasts were carefully scrutinised for any hint of impropriety, but in the 1960s, a younger generation began to push the boundaries. The BBC failed to resist the spirit of the age and `began to embrace a sharper, edgier type of programme’ (p.51).

While BBC journalists strive to be impartial, it is inevitable that underlying con¬victions and presuppositions will colour the everyday editorial decisions of programme makers. It is not without significance that the Corporation’s staff are overwhelmingly drawn from a `meritocratic elite’ marked by `a set of assumptions and values that turns out identikit opinions’ (p.91).

Aitken illustrates his contention that the BBC judges issues according to its own priorities and prejudices with reference to its output on a range of topics, including: abortion, euthanasia, divorce, religion, pornography, Brexit, race, immigration, transgenderism and multiculturalism. In serving as an agent for change, agitating for a new morality, the BBC has invariably depicted socially conservative arguments as callous, reactionary and dogmatic: `The favoured tactic of the modern-day pharisees is to disparage their opponents rather than engaging with their argument.’ (p.208)

While it is rare for the BBC to get its facts wrong, it not exempt from the charge of fake news. `A report can be accurate and still deeply unfair, whether by selection or omission. “Fake news” is not so much about factual inaccuracy as about ideological bias; there are “alternative truths” depending on the standpoint of the individual.’ (p.251) On some topics, debate has been well-nigh shut down altogether:

`The media – and the BBC in particular – has no interest in promoting [a debate on divorce and family breakdown] because it offends against all its core beliefs about how society should operate. It would offend libertarians who object to anything which can be labelled `judgmental”…and it would enrage feminists who would see it as an assault upon the sacred prerogatives of “empowered” women to do exactly as they please. For, as long as these considerations remain the guiding principles of our culture, the needs of our children will be secondary to our determination to live as we please. ‘(pp.259-260)

Aitken argues that feminist philosophy is so closely woven into the BBC’s view of the world that it neither encourages nor allows any serious challenge to feminist theorising.

‘No challenge is ever made to radical feminism’s central charge that women are oppressed by an oppressive patriarchy… [T]he starting point of any BBC discussion on issues involving women is that females have been, and still are, treated unfairly by a society weighted in favour of males.’ (pp.269-270)

The Noble Liar is a sobering read, but ends on a hopeful note that `the old beliefs’ may yet `triumph again over the arid fictions of our current noble lie’ (p.282). The BBC, together with the rest of the mainstream media, has sought to fill an ideological vacuum with an `incohate philosophy’ that runs counter to human nature and is doomed to fail (p.276).

`The liberal hegemony,’ Aitken writes, `has created an unhappy society which doesn’t really know what it believes in’ and it will not last (p.282). The bullying tactics of bigoted liberals who have mastered the techniques of media shaming will not succeed in silencing the majority indefinitely: `Social engineering pursued in the name of dangerous and half-baked theories will, at some point, create a backlash.’ (p.191)

Jeff Dahlberg  writes for OnePeterFive —Because many people are laid off from their jobs and unable to socialize, eat out, or even go to Mass for the foreseeable future, I’ve included a list of good Read more…

Nothing Superfluous: An explanation of the symbolism of the Rite of St. Gregory the Great

Mrs Adfero writesfor Rorate Caeli — If there was ever a book for our times, it is Nothing Superfluous: An Explanation of the Symbolism of the Rite of St. Gregory the Great by The Rev. James W. Read more…

Was Escriva a Marrano?

RANDY ENGEL emails — The question as to whether or not Escriva was a Marrano is one which has been raised by a number of Spanish authors and critics of Escriva. In case you are Read more…