James Delingpole writes for Breitbart News – Britain’s Foreign Secretary Dominic Raab has gone viral. A clip from an interview he gave to Julia Hartley-Brewer on talkRadio has had more than 6 million views in just three days. What can Raab possibly have said that was so interesting?

Simple. Raab said what every ordinary person thinks about Black Lives Matter but which hardly anyone dares say in public.

4 million views and counting… It’s interesting how many are criticising the Game Of Thrones comment but how many more are agreeing with the substance of what Dominic Raab said about not taking a knee… https://twitter.com/talkradio/status/1273525908465426432 …
talkRADIO

Asked if he would take a knee in support of Black Lives Matter, Foreign Secretary Dominic Raab: “I take the knee for two people; the Queen and the Mrs when I asked her to marry me.” Listen live ► http://talkradio.co.uk/live @JuliaHB1 | @DominicRaab 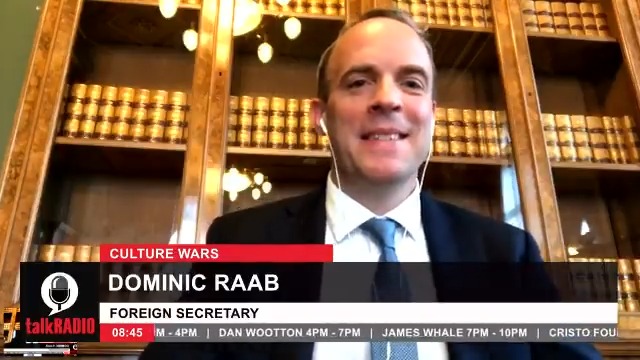 He said that “this taking-a-knee thing” (don’t you just love that dismissive phrase) feels “like a symbol of subjugation and subordination rather than one of liberation and emancipation.”

The practice, he suggested, “seems to be taken from Game of Thrones.“

Raab didn’t specify which Game of Thrones moment. Possibly it’s the one in the books where Torrhen Stark bends the knee to Aegon the Conqueror to spare the life of his people. But I like to think that the scene he really had in mind was Cersei Lannister’s humiliating, self-abasing Walk of Shame, forced on her by the fanatical, proto-Puritanical followers of the High Sparrow.

The Walk of Shame is very fashionable at the moment.

Lego has pulled advertising for their White House and Police Building sets. On Thursday, marketing service Rakuten sent an email out on behalf of the Lego Group requesting a number of products to be removed from marketing amid protests over police brutality. 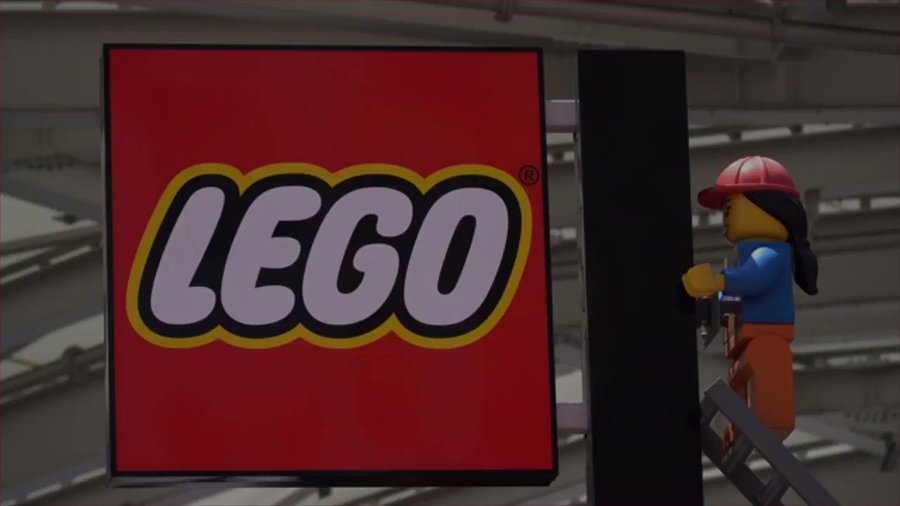 Every institution is doing it too, even ones that have no business doing it because it’s so completely off-brand.

What on earth, for example, does NASCAR think it’s doing banning the Confederate flag – other than signalling to the majority of its market that it despises them and doesn’t want their money?

Personally, I loathe the song — it’s the most dreadful dirge, especially when sung tunelessly by 70,000 drunken blokes in a stadium. But it has, since the 1980s, become a cherished, if slightly mystifying, tradition and there’s really nothing about the song that’s remotely offensive unless you happen to be someone really sad and desperate looking to take offence. Its author, Wallace Willis, was an ex-slave, for goodness sake, not a slaver.

And in any case, what is the RFU doing taking a position of absolutely no interest to its core audience of white, conservative males, the vast majority of whom, I would imagine, find all this needless kowtowing to left-wing, race-baiting identity politics quite excruciating and silly?

The same goes for the ludicrous display in English football’s Premier League the other day when both sides — clearly under strict orders — spontaneously took a knee at the start of the game. Football may have problems with racism but how is this going to help? What do you think the fans are going to feel as they watch players they once considered heroes being either forced to pretend that whiteness is a sin — or actually being so stupid as to believe that whiteness is a sin?

Do you think this will make white working-class England more or less likely to look kindly on ethnic minorities? Do you think it will make ordinary black people more or less comfortable now that their skin colour is equated with tearing down statues, attacking women on police horses, and calling for the abolition of the police?

Defund the police, defend Black communities! This #Juneteenth, it’s more important than ever that we dismantle the racist and ineffective model of American policing. Learn more about how defunding the police works and why we so desperately need it: https://benjerrys.co/37EUU4C 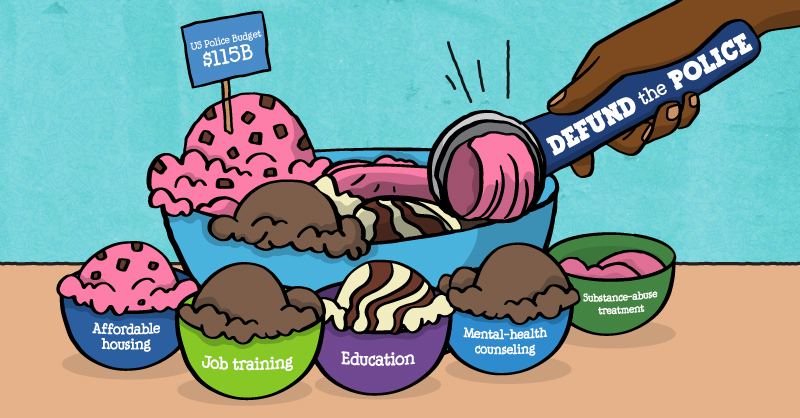 I could go on and on with examples like this of the idiocy which has taken hold from the U.S. to Britain and beyond.

But it would take me so long that I might never get to the main point which is this: most of us normal, balanced, decent people in the real world don’t give a stuff for the Black Lives Matter organisation.

Even those of us who aren’t properly aware of its brief, ugly history as yet another of those vicious, revolutionary, Antifa-style groupuscules that the radical left is forever dreaming up in order to destroy Western civilisation can smell the rat a mile off.

Black Lives Matter has nothing whatsoever to do with helping everyone get along better or fighting injustice or combatting prejudice. Indeed, it’s designed to do the exact opposite: to stir up racial tensions by exaggerating difference and lying about inequality and “structural racism”, with the ultimate aim of breaking the system.

And don’t ask BLM what it wants to replace the system with once it has broken it because it doesn’t know: like all Jacobin revolutionary movements of the radical left, it sees destruction and chaos as ends in themselves from which somehow, some beautiful phoenix will magically emerge. Yeah right.

The radical enclave in Seattle known as the Capitol Hill Occupied Protest (CHOP) will apparently feature a Juneteenth celebration on Friday that will be restricted to black people, while white people are being asked to provide security and donations. https://trib.al/NJipSPK

The only admirable thing about Black Lives Matter is the marketing genius of its name. Had it given itself a more honest, accurate moniker maybe all the big businesses, and all the law firms, and fancy Ivy League and Oxbridge universities, and news media and sporting organisations and Hollywood mummers and B-list celebrities would be slightly less eager to prostrate themselves before its tainted shrine.

Let me stress again: most normal people think Black Lives Matter sucks. And this isn’t because these people are “racist”. It’s because their instincts are right: Black Lives Matter is a really very sinister, unpleasant, race-baiting outfit which merely happens to have fooled a bunch of mostly “educated” liberal useful idiots into thinking it’s a cause so noble as to justify the forcible dismantling of their history, culture, and economy.

I’ve just had an email from a friend in the West Country city of Wells, aghast to see the Cathedral’s Dean and Chapter, together with two bishops, taking the knee in solidarity with Black Lives Matter.

Another friend sends me, in a similar state of disgust, the letter sent out by the headmaster of his highly reputed, academically selective old grammar school, mouthing the usual inane pieties about George Floyd, “tackling discrimination”, and “decolonising the curriculum”.

The RHUL Library said that in an effort to combat “structural racism” it will be removing certain titles from their collection.

What all the heads of all the various institutions — police departments, universities, cathedrals, grammar schools, public schools, City law firms and finance houses, sporting organisations, artistic bodies, etc. — who are taking the knee either literally or metaphorically don’t seem to realise is what a grave disservice they are doing to the people they claim to represent.

In the real world, most of us are positively seething over this ridiculous breast-beating, racial-division-promoting, surrender to the leftist mob.

I’ve seen private WhatsApp group chats of wealthy Oxbridge college alumni vowing to cancel their bequests to their alma maters because they’re so disgusted at the way they’ve turned so woke. (Good luck with your next fund-raising drive, Oriel College, Oxford!)

I’ve heard encouraging reports from certain police departments — not that I’m going to name them — of police being told by senior officers that if any of them “takes a knee” they’ll face disciplinary action; and that also if anyone tries to pull down statues in their area then they are to go in with maximum force.

There are conversations like this going on across the Western world. Behind closed doors, most people have nothing but contempt for Black Lives Matter and the chaos and misery and destruction and division it is causing.

But they daren’t say this openly because where’s the fire support from the Establishment?

It’s almost non-existent. And the same goes for the mainstream media.

See, for example, how even the “conservative” Telegraph reported the Swing Low, Sweet Chariot story. It ended by quoting Brian Moore, the former England international and Telegraph columnist:

“I have always hated it,” he said. “It is not appropriate. It has slave connotations and if the RFU makes that ruling I would be pleased.”

But Brian Moore is not a neutral party in this. He may have been a rugger player once. But he is now much better known as a fanatical Social Justice Warrior forever giving his tuppenny ha’penny’s worth of woke insights to his audience of salivating leftists on Twitter. Politically, he’s about as representative of how your average rugger player thinks as Greta Thunberg.

So why is the Telegraph quoting his hot-take drivel of a dropped ball of a response when it so very much goes against the grain of how most of its readers think?

Because, like the rest of the Establishment, it has largely surrendered to the forces of woke. As indeed Dominic Raab himself felt compelled to do, not long after he had bravely spoken the truth in that interview with Julia Hartley-Brewer.

As Jack Montgomery acerbically put it in his report for Breitbart:

Here is what he tweeted subsequently, presumably under pressure from his hideously cucked conservative government colleagues

To be clear: I have full respect for the Black Lives Matter movement, and the issues driving them. If people wish to take a knee, that’s their choice and I respect it. We all need to come together to tackle any discrimination and social injustice

Why would any decent person — especially not a senior member of a Conservative government — express “respect” for a movement rooted in aggression, racial division, contempt for the family and for the police, and Marxist revolution?

Raab spoke for the people. Then he betrayed them.

Someone needs to take a stand against Black Lives Matter. It has delighted us quite enough for several lifetimes.

Martin Bürger reports for LifeSiteNews –  According to a report by the French Catholic newspaper La Croix, Pope Francis’s long-awaited document reforming the Roman Curia has already been signed and is currently being translated into Read more…

Noted theologian agrees with Archbishop Viganò over problems with Vatican II, but suggests ‘reset’ is not possible

Maike Hickson reports for LifeSiteNews —  In the recent weeks, Archbishop Carlo Maria Viganò and the Italian theologian Father Alfredo Morselli have been conducting a friendly exchange of thoughts in the wake of the Italian Read more…