Robert Lazu Kmita writes for The Remnant –– The remaining letters from J.R.R. Tolkien contain numerous passages that express the religious beliefs of the famous creator of the hobbits. Before we start reading those letters from which we can learn how the creator of the hobbits understood and lived his Catholic faith, we have to remember that he was raised and educated by his mother, Mabel Tolkien (born Suffield), a convert from the Baptist neo-protestant sect to the Catholic Church. The price of her conversion – which happened in 1900 when she and her two children were received into the Roman Catholic Church – was really great: martyrdom. Even though she was a widow (her husband, Arthur, died in South Africa on 15 February 1896), her Baptist family stopped any financial assistance when her conversion become a known fact. As a direct consequence of all the health difficulties she suffered, Mabel died of diabetes on the 14th November 1904. She was just 34 years old.

John Ronald Reuel (born on 3 January 1892) and his brother, Hilary Arthur Reuel (born on 17 February 1894), were raised and educated by a Catholic priest, Father Francis Xavier Morgan from the Congregation of the Oratory created by another great Catholic writer: Saint John Henry Newman. Both John and his brother, Hilary, were convinced that their mother died as a martyr for her Catholic faith. It is easily to imagine what influence had this unmistakable truth in the souls of these two young brothers. That is why, as we will notice in his letters, J.R.R. Tolkien was a fervent Catholic who intensely lived his faith.

The author of The Lord of the Rings placed in the center of his life the Holy Sacrament of the Altar, as we can read in a letter sent to his second son, Michael, on March 1941:

Out of the darkness of my life, so much frustrated, I put before you the one great thing to love on earth: the Blessed Sacrament.”

The importance that J.R.R. Tolkien has always attributed to the Holy Eucharist is yet much more evident in another letter, dated 1963, to the same son, Michael, where he explains why he is sure that the only true church on earth is Catholic Church:

For me that Church of which the Pope is the acknowledged head on earth has as chief claim that it is the one that has (and still does) ever defended the Blessed Sacrament, and given it most honour, and put it (as Christ plainly intended) in the prime place. ‘Feed my sheep’ was His last charge to St Peter; and since His words are always first to be understood literally, I suppose them to refer primarily to the Bread of Life. It was against this that the Western European revolt (or Reformation) was really launched – ‘the blasphemous fable of the Mass’ – and faith/works a mere red herring. I suppose the greatest reform of our time was that carried out by St. Pius X: surpassing anything, however needed, that the Council will achieve. I wonder what state the Church would now be but for it.”

A firm and vehement critic of the Protestant revolution which has completely eliminated the Holy Liturgy and the Sacraments from the lives of millions of fallen Catholics, J.R.R. Tolkien was not just an improvised apologist of Catholicism, but, at the same time, a fully practical and pious Catholic. Later in his life, when the revolution will enter into the Church itself – due to the Pope Paul VI “reforms” and Second Vatican Council – he will manifest himself as a staunch opponent of the destruction/substitution of the Mass of the Ages of Pope Gregory the Great by a fabricated liturgy. Another relevant fragment – which contains a brilliant refutation of the liturgical “reform” done in the name of returning to ‘primitive Christianity’ – can be read in a letter from 1967:

The ‘protestant’ search backwards for ‘simplicity’ and directness – which, of course, though it contains some good or at least intelligible motives, is mistaken and indeed vain. Because ‘primitive Christianity’ is now and in spite of all ‘research’ will ever remain largely unknown; because ‘primitiveness’ is no guarantee of value, and is, and was in great a reflection of ignorance. Grave abuses were as much an element in Christian liturgical behaviour from the beginning as now. (St Paul’s strictures on Eucharistic behaviour are sufficient to show this!) Still more because ‘my church’ was not intended by Our Lord to be static or remain in perpetual childhood; but to be a living organism (likened to a plant), which develops and changes in externals by the interaction of its bequeathed divine life and history – the particular circumstances of the world into which it is set. There is no resemblance between the ‘mustard-seed’ and the full-grown tree. For those living in the days of its branching growth, the Tree is the thing, for the history of a living thing is part of its life, and the history of a divine thing is sacred. The wise may know that it began with a seed, but it is vain to try and dig it up, for it no longer exists, and the virtue and powers that it had now reside in the Tree. Very good: but in husbandry the authorities, the keepers of the Tree, must look after it, according to such wisdom as they possess, prune it, remove cankers, rid it of parasites and so forth. (With trepidation, knowing how little their knowledge of growth is!) But they will certainly do harm if they are obsessed with the desire of going back to the seed or even to the first youth when it was (as they imagine) pretty and unafflicted by evils. The other motive (now so confused with the primitivist one, even in the mind with any one of the reformers): aggiornamento: bringing up to date: that has its own grave dangers, as has been apparent throughout history. With this, ‘ecumenicalness’ has also become confused.” 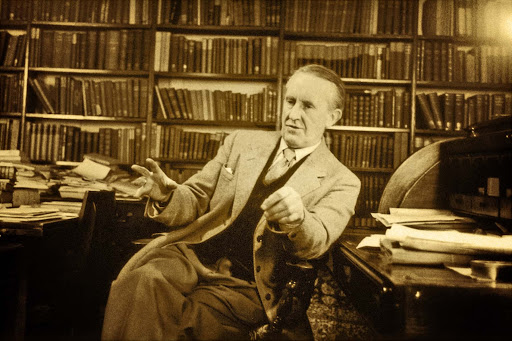 Mentioning in a letter from the 2nd January 1969 that his Patron is Saint John the Evangelist, he does not waste any occasion to emphasize his Catholic intellectual background. Actually, he made from his Catholic faith the main axis of his whole life. That is why marked by such an influence one of his sons, Michael, became a Catholic priest.

A man of the times in which he lived, John Ronald Reuel Tolkien was a full “citizen of the Kingdom of Heaven” on earth – Catholic Church. Only a critic or a historian who is blinded by his own prejudices can ignore the profound religiosity of J.R.R. Tolkien. But how does this religiosity influenced the epic stories written by a fiction author who delighted millions of readers from all faiths and races on earth?

If Tolkien’s letters allow us to unveil the religious, Catholic dimension of their author’s life, the relationship between his literary creations and his religious faith is a delicate matter. All the aspects of this relationship are included in a relevant passage from a letter written in 1953 to one of the most important friends of J.R.R. Tolkien, Father Robert Murray S.J., to show how a certain religious element is included in his stories:

The Lord of the Rings is of course a fundamentally religious and Catholic work; unconsciously so at first, but consciously in the revision. That is why I have not put in, or have cut out, practically all references to anything like ‘religion’, to cults or practices, in the imaginary world. For the religious element is absorbed into the story and the symbolism.”

If the religious element seems to be a noticeable absence in Middle Earth, in this letter the author highlight that this element is “absorbed”, camouflaged, in any case implicitly present in the texture of the story – and especially in its symbols.

As many other great Catholic writers from 20th century like Gilbert Keith Chesterton and Georges Bernanos, J.R.R. Tolkien does not write a programmatic “Catholic literature” which represents a sort of a disguised form of apologetics. None of these writers accepted the label of “Catholic writer”. J.R.R. Tolkien considered himself a writer but not necessarily a “Christian (i.e. Catholic) writer”. He is a Catholic who, among other secondary vocations (such as those of teacher, husband and father), has received that of a writer. He does not mistook the principles and rules proper to the literary art with those specific to religion and theology. Although harmonious, in his perspective art and faith are distinct. Any of these two types of human experience and thinking has its own field. This does not mean “divorce”, but a form of co-existence where strong influences and exchanges are always possible. That is why J.R.R. Tolkien does not deny the influence of his Catholic faith on those values codified in his writings. For instance, he accepts the interpretation of a devoted reader, Deborah Webster, who thinks that the incantations to Elbereth or Galadriel from The Lord of the Rings are similar to the Catholic prayers addressed to the Holy Virgin Mary, or that the elfish bread called lembas symbolizes the Holy Eucharist.

Besides all these interpretations, we can propose another explanation to all those readers who ignore the Catholic background of J.R.R. Tolkien’s works by invoking the fact that in Middle Earth there is no religion. Why so? Because if the author himself explains in a letter written in 1955 that Middle Earth “is a monotheistic world of ‘natural theology’,” he adds immediately that “the ‘Third Age’ was not a Christian world.” In this point we emphasize that the historical context where the action from both stories The Lord of the Rings and Silmarillion happens is an ancient, pre-Christian one.

Under this respect, J.R.R. Tolkien follows the same path as early Catholic thinkers like Saint Justin the Martyr and Philosopher or Clement from Alexandria who searched and discovered in the teaching of ancient pagan sages the so called “semina Verbi” (“seeds of the Logos” – our Lord, Jesus Christ) who anticipated the Christian Revelation. In the same sense we can discover in J.R.R. Tolkien’s stories many consistent Christian elements that are not fully explicit, being rather signs – “symbols” – meant to guide the readers to the fullness of the Christian faith.

The Outsider: Pope Francis and His Battle to Reform the Church by Christopher Lamb. Orbis Books, Amazon £17.16 Pravin Thevathasan writes for CF News –  “Tales from Shakespeare” was written in 1807 by Charles and Mary Read more…

Why the Latin Mass matters in the real world

Who will be the next Pope: The “Safe Bet”