Germany: Muslim migrant strangles his baby’s mother in part because she had the baby baptized

Robert Spencer reports  for Jihad Watch – If he is moved to murder by a baptism, what were the chances that Hamzar D. would ever have become a loyal, productive member of German society? But German authorities have no idea how many more are like him, because they wouldn’t dare ask the relevant questions. To do so would be “Islamophobic.” 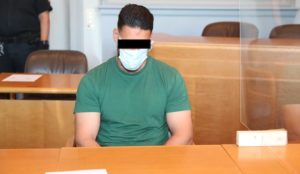 Kiel – The act of madness took place in the hotel “Pelli-Hof” in Rendsburg: a mother (28) is strangled next to her baby. Now her killer describes the course of the night of death in the hotel room in the district court of Kiel.

The Tunisian Hamzar D. (25, convicted of violent offences) and Ann-Kathrin K. had met in a disco. The child, a boy, was born in July 2019. “But after birth, she changed,” says Hamzar D. There was a quarrel, then the break-up. He complains that the mother has long withheld his son from him, and then she has also made his boy a Christian.

Meetings with her escalated; there were blows, and then came to the ban on contact. Nevertheless, the two continue to meet. They spend the night on February 13 in the hotel room, drinking vodka and Red Bull – he says they had sex. Then her child wakes up, screams. The mother leaves the hotel room. He takes care of his son. He falls asleep.

D. discovered photos of men on his ex’s mobile phone. He freaks out, tries to hang himself with his belt in the bathroom, slashes his wrists and swallows up to 70 tablets.

Ann-Kathrin K. returns. There is a fight. He strangles her: “I just wanted her to be quiet.” The woman collapses. D. tries to resuscitate her, calls the ambulance service. Police detain the man. Her baby goes to a foster family.

The victim’s mother and sister were in the courtroom, hearing in shock the accounts of the night of her death.

The trial continues on 14 August.

UNITED STATES Does the Pope want Joe Biden to win

Martin Bürger reports for LifeSiteNews—  Two German cardinals have warned that the “synodal path” enacted by the German bishops could lead to “secularization,” “division,” and even “some kind of German national church.” Cardinal Rainer Maria Read more…