Lianne Laurence reports for LifeSiteNews –  The Toronto Catholic District School Board released a statement Monday acknowledging June as the month devoted to the Sacred Heart of Jesus and also as a month that “manifests pride” for “those in our community who identify as LGBTQ+.”

The TCDSB June 1 statement comes less than a month after LGBT activist and Toronto Catholic elementary school teacher Paolo De Buono asked the board to officially recognize June as “Pride Month.” The motion to receive De Buono’s delegation lost on a tie vote.

The June 1 statement is signed by TCDSB director Rory McGuckin and board chair Joseph Martino and posted on Facebook and Twitter.

“June is devoted to the Sacred Heart of Jesus, which for Catholics is a sign and symbol of God’s boundless and passionate love for all humanity. We would also like to acknowledge that the month of June is of particular importance and manifests pride for those within our community who identify as LGBTQ+,” reads the statement.

The TCDSB, Canada’s largest publicly funded Catholic school board, is committed to equity and inclusion as the foundation of a multi-year strategy, McGuckin and Martino state.

“It is incumbent upon us to ensure that our schools are safe and welcoming places for all. We must also acknowledge that there is always more to do,” they write.

“We must continue to identify and eliminate discriminatory practices, systemic barriers, and biases. We must recognize that students who identify as LGBTQ+ may experience discrimination and judgment,” they add.

“As Catholics, we believe that we are wonderfully made in the image and likeness of a God who created us and loves us unconditionally — just as we are. We are called to love and celebrate one another, just as God loves and celebrates each one of us. We honour the inherent dignity in each other by treating one another with care, compassion, and respect.”

“It’s utterly blasphemous for a Catholic school board to speak about devotion to the Sacred Heart of Jesus while affirming homosexuality,” he said.

The image of the Sacred Heart of Jesus reminds Catholics of God’s love, but also that Our Lord’s heart was pierced by our sins, added Gunnarson.

“The Catholic faith following Bible teaching makes it clear that homosexual acts are a sin that cry out to God for vengeance. Pride is also a sin. It is considered by many to be the sin that resulted in Adam and Eve losing their relationship with God. Sin should never be celebrated by anyone, especially a school board that calls itself Catholic,” he told LifeSiteNews.

“It’s true that God is love. Sin, however, finds no place in God or in his kingdom that he has prepared for those who love him in return. God loves us so much that he gives us laws and standards to keep us on the straight and narrow road to his loving heart,” he said.

The Catholic Catechism teaches that while “unjust” discrimination against LGBT individuals is never justified, homosexual acts are intrinsically disordered and gravely depraved and that the same-sex inclination is itself an objective disorder. The Church teaches that gender ideology contradicts God’s plan for human sexuality.

The TCDSB statement was similar to those of other Catholic boards noting “Pride Month.”

The Algonquin and Lakeshore Catholic District School Board tweeted: “The month of June is designated as Pride Month. This month, and every month, our Catholic schools are committed to nurturing safe and inclusive learning environments where every student & every member of our community is welcomed, valued & respected.”

The month of June is designated as Pride Month. This month, and every month, our Catholic schools are committed to nurturing safe and inclusive learning environments where every student & every member of our community is welcomed, valued & respected. #PRIDE2020 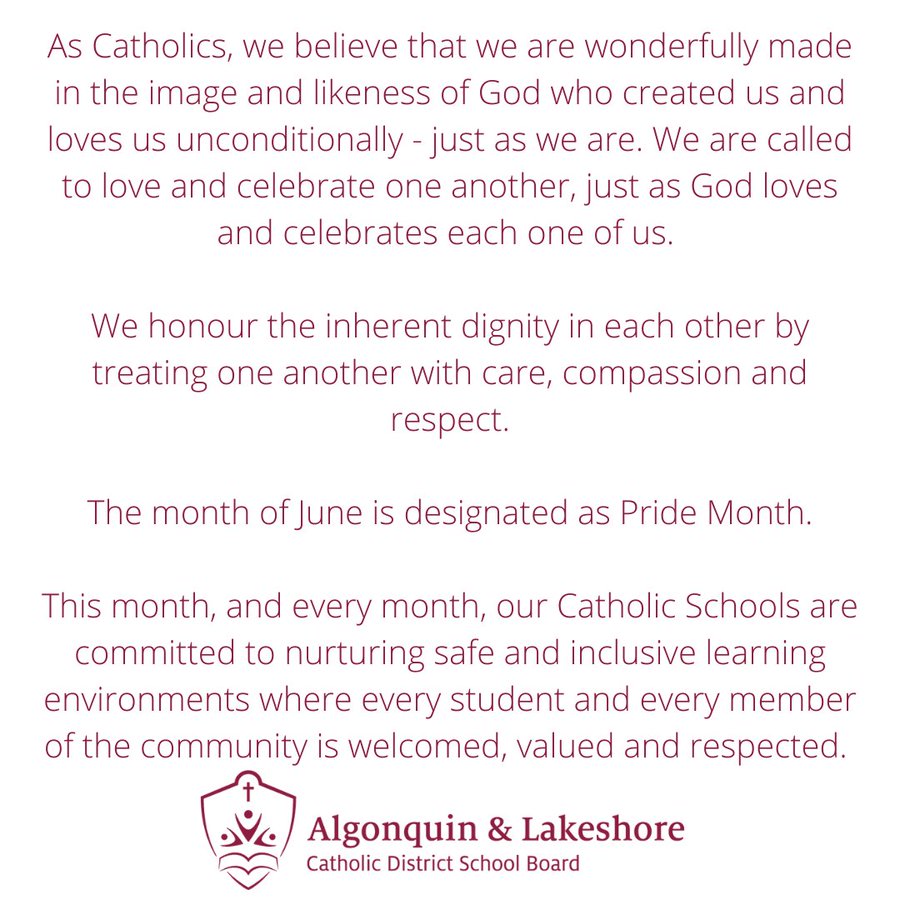 June is Pride Month! We continue to honour the dignity of every person, embracing diversity and creating welcoming places for all. We are all wonderfully made. We love because he first loved us. (1 John 4:19). #ocsbEquity #ocsbBeCommunity 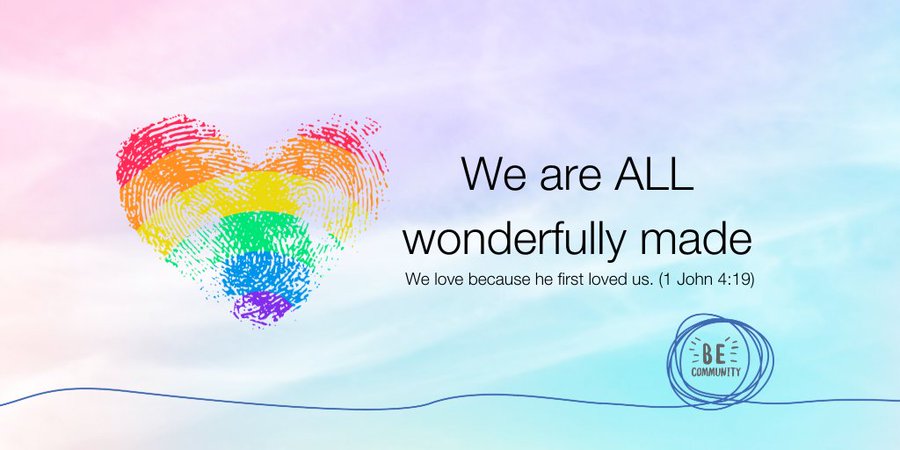 Notably, the words in the OCSB’s tweet — “We are all wonderfully made” — and the quotation from 1 John 4:19 — “We love because he first loved us” — appear on the “Catholic” version of the “Pride” flag that Waterloo Catholic District School Board announced it would fly over all its schools to recognize “Pride Month.”

The so-called Catholic version of a Pride flag depicts Jesus with his arms outstretched over an array of rainbow-colored figures. It was one of a number of options designed by the Institute of Catholic Education, according to WCDSB’s director of education, Loretta Notten.

The WCDSB decided not to fly any flag for “Pride Month” after backlash from pro-family groups and concerned Catholics, as well as from LGBT activists, with the latter upset that the board was not raising the rainbow “Pride” flag.

However, WCDSB schools will display the “Catholic” version of the “Pride” flag in their vestibules this year, while the board “consults with the LGBTQ community on next steps leading to Pride Month 2021,” the board announced in a press release.

It also posted a statement on its website similar to that of the Toronto, Ottawa, and Algonquin Lakeshore Catholic school boards.

“The month of June is designated as Pride Month across the province of Ontario, and indeed much of Canada and the globe,” wrote the WCDSB. “This month, and each and every month, our Catholic schools are committed to nurturing safe and inclusive learning environments where every student and every member of the community is welcomed, valued, and respected.”

LifeSiteNews contacted these Catholic boards to ask if the statements meant they were formally recognizing “Pride Month,” and if so, how could this be compatible with Catholic teaching? None responded to clarify their position.

The dire consequences of such statements cannot be overemphasised, Gunnarson said.

“For Catholic school boards to recognize or acknowledge ‘Pride Month’ in any way is completely misguided, and is affirming confused children on a path to hell, and those who are doing this are putting themselves on the same path,” he said.

“It’s not too late to get off that path, and back to the straight and narrow road.”